usually, upon returning from any amount of time spent with my family in nebraska, i go through a bit of a slump.  i see the city lights for what they really are: wasted energy.  i smell the pee in every subway station and somehow manage to run into each and every nasty new yorker - convincing me that i need to get the hell out of this place and move to somewhere green and clean and calm.  this usually passes in one or two days; i'm swept into the bustling current of life here, the lights get prettier, the stink is less pungent and someone will eventually smile in my direction.  i'm proud to be a new yorker.  for six years i've managed to stay afloat in a city where many folks get eaten alive.  i like that i know which subway to take to coney island, where the nearest public bathroom is located and which way to raise/tilt my umbrella when walking through a crowd (it's called umbrella traffic and, i swear, someone should write a book).

this time has been much more difficult.  with lua getting older and turning into such a curious, fast-paced babe, you would think new york would suit her - it actually does just the opposite.  we can't afford "mommy and me" classes, we don't have a big enough apartment that she can run wild and i have yet to find a patch of grass, or even open space, without one of the following icky-ickies tucked somewhere:

a condom (unused and used, people), a needle, a piece of poop (pretty sure it was dog, but..) or a loogie (is that how you spell loogie?).

anyway, if new york city is one end of the spectrum, aurora, nebraska is the other.  i will admit that i would probably go insane if we actually picked up and moved to aurora (illustrated by our antics last night, when andrew ran to our corner deli and bought a whole pineapple at midnight, just because we felt like it.  compare this to jim's foodmart, in aurora, that closes at nine) but it really is a beautiful little town.  clean and bright - small enough that you can let your kids ride bikes until long after sundown, but big enough to have a thriving art scene, coffee shop and a chinese restaurant.  i know.

i think what really has me feeling melancholy is my family and the way they smooshed and smothered and loved on all of us.  i have a pretty large family when you include cousins, second-cousins, aunts, uncles and, of course, being from a small town there are many folks that have become family through the years.  during our visit, these people would stop by the house and bring pie, or just chat or invite us over for supper.  you may think this was all because we were visiting, but no - it is a daily occurrence at my childhood home to have a friend or family member just stop by to say hi.  there are soup and pie nights, jam sessions, early morning hikes.  my brother easily took off work the morning to see us off, telling me that his boss thinks family should come first - imagine that.

i keep imagining a life where every week lu spends a day with my parents, just for fun, so andrew and i can go out on a date.  where my brothers come over for waffles on sunday and throw a ball around the yard and we eat my parents' garden fresh food and there is always someone to hug the baby.  lu was so busy and happy for most of our trip (save a two hour car ride from hell) and slept like, well, like a baby.  tonight it took me over an hour to get her to sleep because she didn't want to be put down.  she would feel my weight shift forward and her sleepy eyes would shoot open.  now, i'm not deluded enough to think that she actually misses nebraska and is giving me problems because she hates new york.  she was probably just happily exhausted enough from all the excitement that she didn't fight sleep when we were in aurora (it also could've been the five pounds of potatoes my mom fed her :))  but it still enables me to keep this hum-drum, drippy attitude:  this city sucks.

i promise to try and pull myself to a more positive outlook sometime soon.  hopefully uploading these pictures will help - wish me luck! 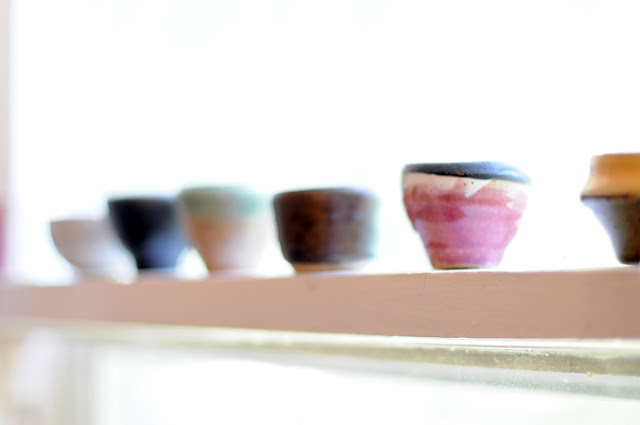 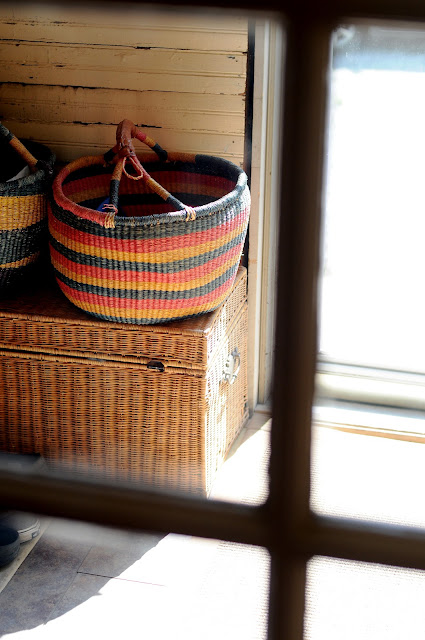 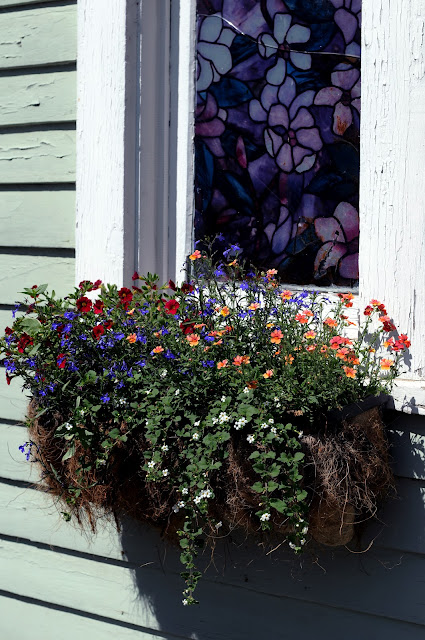 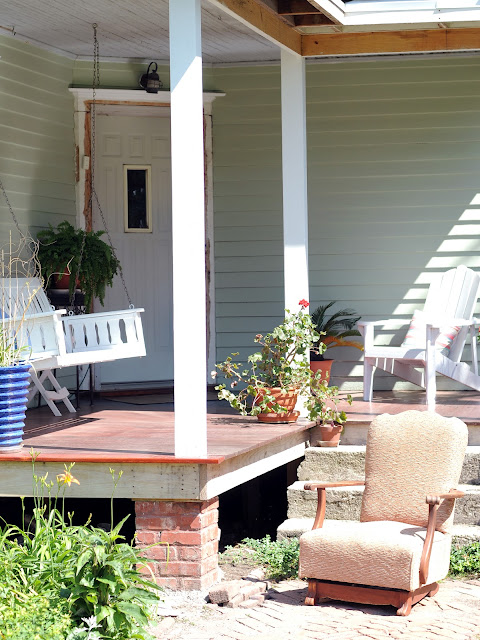 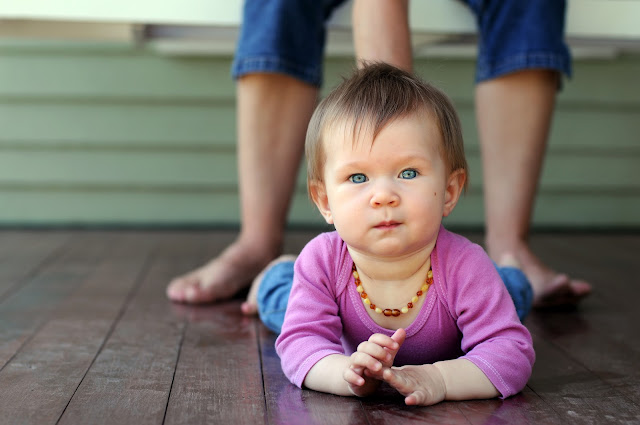 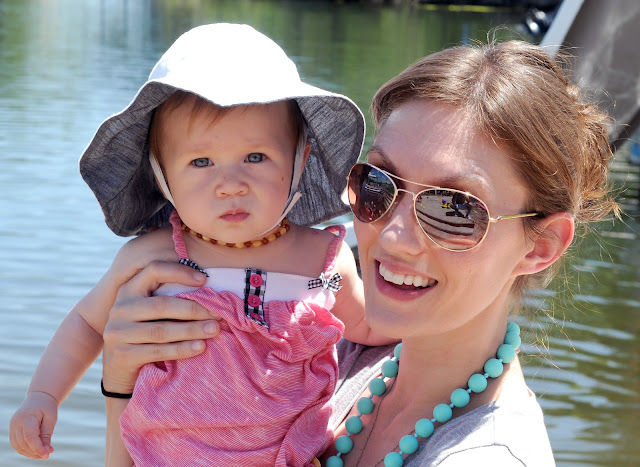 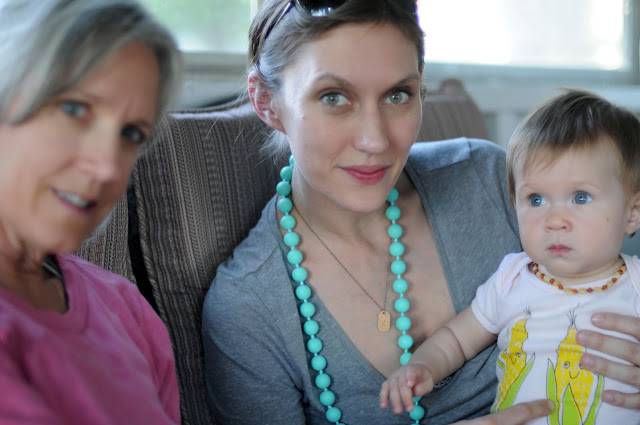 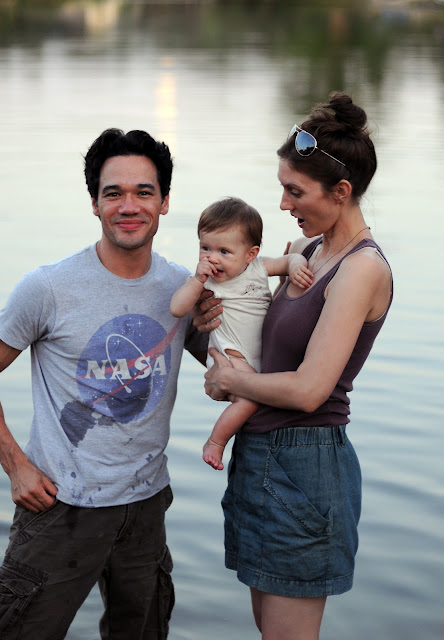 ps - some of you have asked what the heck those funny beads are...you can find them here.  they are called "chewbeads" --made of silicone and are great for teething babes!
xoxo MsKO at 9:08 PM

MsKO
i've always wanted to be an actress and a writer and a photographer. and a childbirth educator and a bee-keeper and mommy. that last one I actually accomplished.

Me, You and Lu Lovelies